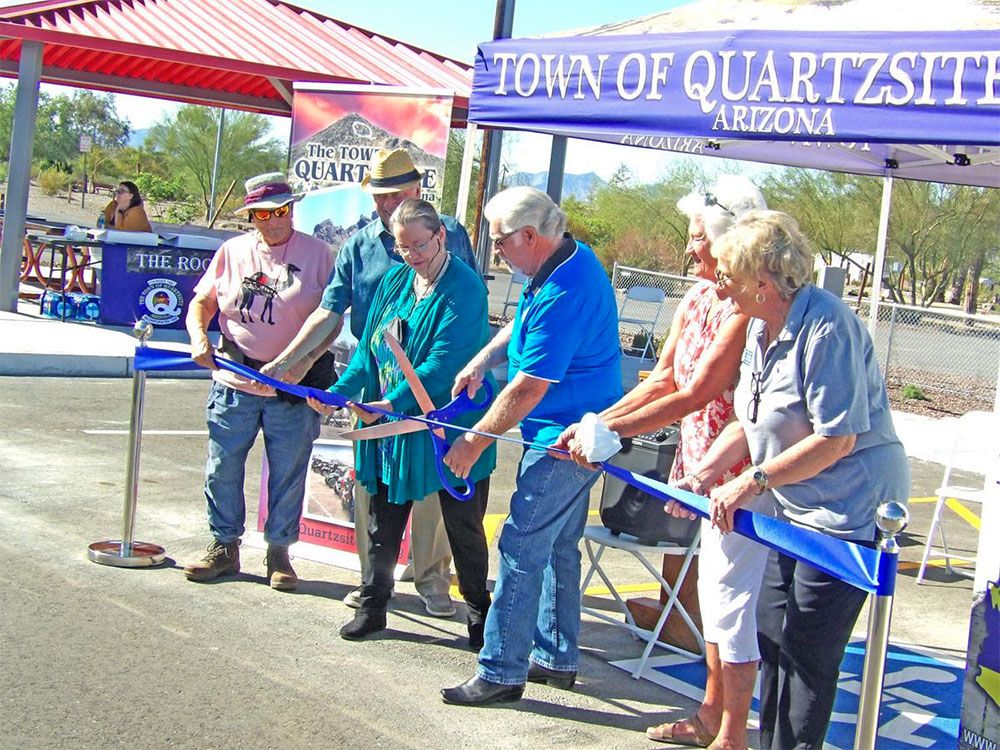 Reprinted from the Parker Pioneer

Off-roaders have a new place for staging before they head out into the desert. A new staging area in Quartzsite had a grand opening and ribbon-cutting Tuesday, Oct. 19. It’s located on Quail Trial, just north of Quartzsite Town Hall. It’s between the Quartzsite Justice Court and the town’s water well. To access the site, make a turn off Plymouth Road.

The site is designed to link into the Arizona Peace Trail and other off-road trails in the Quartzsite area.

The opening ceremony was attended by officials from a variety of offices, including town and county officials and officials from the primary source of funding for the facility, Arizona State Parks & Trails.

Quartzsite Mayor Norm Simpson said it was a great day for a ribbon-cutting.

Goldberg said the facility provides a safe, secure overnight place for off-roaders to park trailers and towing vehicles. They have a total of 22 pull-through spaces. There are also restrooms and a picnic area. There are no fees.

No overnight camping is allowed at the facility. Goldberg suggested that, if off-roaders need a place to stay overnight, they should check into one of the area’s many campgrounds or motels.

Goldberg said the site had been in the works since 2017. The Quartzsite Sunriders OHV Club had the idea of a staging area where people could park while off-roading. The current site was selected in 2019, and Goldberg was authorized to apply for a grant from Arizona Parks & Trails.

Parks & Trails approved a $483,000 grant for the facility in November 2019. The grant was paid for from revenue for licenses for off-road vehicles.

Goldberg said the facility proved to be more expensive than anticipated. Among other things, the decision was made to pave the surface of the parking area. While this was initially more expensive than leaving it unpaved, it would save on long-run maintenance costs as off-road vehicles wouldn’t be tearing up a paved surface.

When it came to the added costs, Goldberg said Parks & Trails worked with them. The total cost was estimated at $600,000.

The Quartzsite staging area is designed to link into the Arizona Peace Trail, a 675-mile off-road loop that links Yuma and Bullhead City. It’s helping to promote tourism in Yuma, La Paz and Mohave Counties.

The driving force behind the Peace Trail and its current president, J.C. Sanders. He is a former president of the Bouse Ghost Riders.

The Arizona Peace Trail grew out of efforts started in July 2013 from the Bureau of Land Management and the Arizona Game & Fish Department to create a connector trail between Bullhead City and Yuma. This grew out of the many miles of dirt roads, old mining roads and other trails in western Arizona and the growth of motorized off-road recreation in the area.

The Trail non-profit is overseen by a board of directors. The current chairperson of the board is La Paz County District 3 Supervisor Holly Irwin.

Nearly all of the trail is now open and has been marked. The trail is in its final stages of approval. It has already drawn off-road enthusiasts from around the world.

To find out more about the Arizona Peace Trail, go to their website, arizonapeacetrail.org.